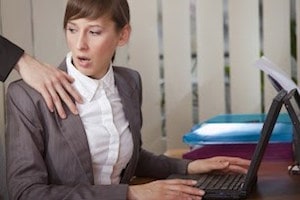 As a Los Angeles workplace sexual assault attorney, I know that if you have you been the victim of workplace sexual abuse or harassment in the L.A. area or anywhere in California, it is important to have an experienced lawyer on your side who can help you navigate through the legal process. Additionally, it is wise to educate yourself about each applicable California law so that you can have a better understanding of which variables might impact your case.

Women and men are provided protected against unwanted sexual advances at work due to the Fair Employment and Housing Act. This means that your employer can be held liable in most cases if any of the following situations occur:

Do I Have to Inform My Employer Before Filing a Case?

Most people erroneously believe that they are legally required to tell their employer before they seek restitution for sexual harassment or assault. Although there are some provisions in the law that could potentially allow an employer to use their ignorance of the situation to avoid a guilty verdict, you are not without options if you failed to report that assault or harassment in a timely manner.

According to state law, upper management does not necessarily need to be aware of the situation, especially if a member of the management team was involved. However, your employer might be able to remove their liability if you do not tell them about harassment from a non-management employee. This is especially true if the employer has a program in place that is intended to prevent harassment of a sexual nature from occurring on the job.

It is also important to note that employers typically have the ability to avoid legal consequences if they immediately take corrective action against a non-management employee as soon as they learn that there is an issue. With all of these variables, it is best to speak up after the incident happens. However, you should still contact a lawyer to discuss your case even if you did not file a complaint with your employer.

A good example of how failing to report harassment can impact your case happened very recently. Sacramento State agreed in March 2015 to pay $123,000 to settle a harassment lawsuit that had been filed by former employee Jeffery Sharp. According to Sharp, he had been subjected to suggestive comments, gestures and touching by the Advancement Office’s Director of Development.

The university fought back by stating that Sharp had not followed the proper reporting procedure, but they ultimately offered a six figure settlement in order to make the situation go away. This is highlights the fact that many employers will be willing to settle for a smaller figure if they can get you to agree to waive any other liability that they might have in the applicable case. On the other hand, if the lawsuit had moved forward and the university had been found guilty, it is likely that Sharp would have received a larger settlement.

When the Employer Fails to Take the Proper Action

There have been many successful sexual harassment and assault cases in California, including one that was very high profile. In 2002, a group of six women who had worked together in Escondido won a $30 million settlement against Ralphs grocery store. All of the women reported being sexually and physically harassed and assaulted for a year by the store manager.

In this particular case, the women did report these issues to higher management, but the grocery chain’s response was to simply transfer the offending manager to another location. Jury members indicated that this lack of a proper response to the situation was one of the reasons that they awarded the six women such a large settlement.

Although an experienced harassment and assault attorney may be able to help you achieve a satisfactory resolution for a situation that you did not tell your employer about, you do still need to fall within the statute of limitations for workplace sexual assault and harassment cases. Therefore, whether you were harassed by your boss or assaulted during a job interview, you must file a legal complaint within one year if you want to move forward with a lawsuit. Please note that it takes time to build a solid case, so it is always best to contact a lawyer as soon as possible after the incident to ensure that you are able to meet this legal time frame requirement.

What Are the Most Common Sexual Harassment Cases?

Whether you have experienced one of the previously listed case types in the Los Angeles area or something that happens less frequently, it is best to contact a workplace sexual assault and sexual harassment attorney for assistance. This will enable you to take legal action against the company responsible for allowing you to be forced into working in an unsafe and uncomfortable environment.