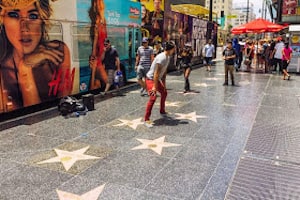 The top causes of Los Angeles pedestrian accidents is an issue which I think about a lot as an attorney and advocate for pedestrians in the City of L.A. Walking is healthy, a green activity that reduces your carbon footprint and keeps you trim. In Los Angeles, however, your footprint may end up lined in chalk. California leads the nation in pedestrian-vehicle collisions, with victim deaths accounting for 14 percent of all traffic fatalities. Angelenos, however, can simply transpose those numbers to a scary 41 percent. Streets in the City of Angels carry a caveat — walker beware — yet every day, accidents wreck the lives of unfortunate victims, the drivers who strike them and even innocent standersby. Whether you travel on foot or drive a car, van or truck, here are some things you need to know.

Distractions and Multilane High-Volume Traffic — A Lot Going On

On any given day, 40,000 or more cars and trucks pass through some of the city’s busiest intersections. Contrast that to the high-volume threshold of 12,000. Then, consider that inside all those vehicles, drivers may be eating, drinking, smoking or even texting. When cars are traveling three abreast and crosswalks span six lanes intersecting another six, the slightest distraction can spin into disaster. Multiple drivers trying to compensate can skid into huge intersections that render even large adults miniscule to invisible. A University of California Transportation Center study found that once the number of traffic lanes exceeds two, the probability of a vehicle striking a victim escalates with each additional lane.

Los Angeles is a shopper’s emporium, drawing people work-bound or in search of pleasure. Streets and parking lots can be minefields as drivers vie for parking spaces, shoppers search for cars, and weary families launch the trek home. Ranks of parked cars reduce visibility for adults and conceal children. Crowded parking may even obstruct walking paths or traffic lanes. With cars and people moving, children may escape distracted parents, shoppers may drop packages and overtired people may be hurrying or inattentive. Regardless, the busier a shopping area is, the more fatal incidents occur.

Speeding and Crosswalks With or Without Traffic Lights

Crossing only at the light does make a difference. Using uncontrolled crosswalks — those without a traffic light — puts you at risk, especially if they are at the end of long blocks or interrupt a throughway. Unfortunately, stop signs are not enough thanks to ego driving and the California roll. Even crossing at a light can be risky when an intersection interrupts a lengthy stretch of road. Drivers may be unprepared or even reluctant to stop, and once a vehicle reaches 35 mph, victim death rates triple.

Optimism, Weather and Time of Day

You may think that more accidents happen in smoggy darkness, but that simply isn’t the case. Vehicles strike people in broad daylight under clear skies. Collisions begin around 6 a.m. and escalate throughout the day, with the 8 p.m. to midnight timeframe accounting for nearly a third. Interestingly, more mishaps occur in areas with streetlights than in those without. Streetlights offer drivers a false sense of security while encouraging sightseers and natives alike to enjoy mild LA evenings.

Expecting the Unexpected and Areas With Children

Children aged 5 to 15 are at greatest risk, with one of every five in an accident a fatality. The reason is astonishingly simple and profoundly disturbing. Areas that should be child-friendly locales actually escalate risk. First are school zones. Up to 18,000 children walk to school every day, the majority crossing intersections at some of LA’s deadliest hot spots. The city’s Safe Routes to School initiative is making a difference, but children, individually or en masse, can prove unpredictable even with crossing guards in place.

A second danger zone is high-density, less affluent residential areas where children do not have the luxury of safe backyards. Instead, they may play in or near limited park areas, on narrow sidewalks or even in the street. Often these areas also have congested parking, decreasing visibility. Children have been struck while chasing balls, running from games of tag or stumbling into the street as part of horseplay. Even teens may not be visible to drivers, who may also be navigating past double-parked cars or delivery trucks that obstruct traffic lanes.

According to Centers for Disease Control and Prevention statistics, 48 percent of vehicle-pedestrian crashes involved blood alcohol concentrations greater than or equal to the 0.8 gram-per-deciliter limit. The figure by itself may not surprise you, but its breakdown might. Victims made up 34 percent, drivers only 14. The University of California study found an area’s frequency of accidents corresponded with its number of bars. Like drivers, people walking under the influence also lack judgment, fail to perceive danger and act in unpredictable ways.

Responsibility To Obey, Duty of Care and Negligence

Questions about right and wrong in these situations can be painfully difficult to answer, and all come down to legal determinations of reasonable, responsible behavior versus negligence. Despite acknowledged danger zones, traffic surveys, endless excuses and desperate “I’m so sorry” apologies after the fact, two basic truths remain:

Honoring traffic signals and signs is a baseline, but it’s not always enough. Drivers must also exercise greater watchfulness and caution when traveling through high-risk areas, especially where children may enter the equation. When people purposely fail to act as they should and others are forced to pay the price, offenders can and should be held both criminally and civilly negligible. Proof that California agrees came in 2013, when it extended the criminal statute of limitations on hit-and-runs from 3 to 6 years.

You may be devastated, but the skilled legal assessment of an experienced attorney can help sort through the complex and overwhelming details. Injuries or a death sustained because of someone else’s negligence behind the wheel often leaves you little recourse but to seek damages. Assistance from a trusted pedestrian accident attorney can ensure you are left with more than just memories.