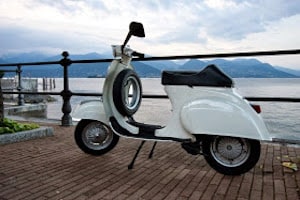 As a scooter accident attorney in Los Angeles , I know that scooters, mopeds, and other types of motor-driven cycles can be both fun to ride and an economical form of transportation but, can also be involved in crashes causing serious injury or even death. Let’s face it, L.A. is a high volume traffic city and motor vehicle operators can be both rude and dangerous to persons operating smaller motorized vehicles like Vespas or other scooters. Knowing how to protect yourself from being involved in a wreck and what to do if you are injured due to a negligence or wrongdoing or a violation of the rules of the road by another driver is crucial!

Most Common Causes of Scooter Crashes in Urban Environments Like L.A. and how to Avoid Them

The most common causes of accidents involving scooters and other motor vehicles are as follows:

Make Yourself More Visible: As with any vehicle that is smaller than a passenger car, lack of visibility is the number one cause of crashes ending in serious bodily harm or even death. Make yourself more visible by using your headlight, having reflectors, wearing brightly colored clothing, choosing lane location wisely, and avoiding “blind spots” such as riding along the rear and to the side of an automobile.

Be extremely vigilant and aware of your surroundings at intersections: Driving defensively is always a good “rule of thumb” but, it is crucial when you are operating a smaller motorized cycle and approaching or passing through an intersection. Be cautious for the driver making that left hand turn or the one behind him trying to make the “tag along left turn”. California law requires drivers approaching a stop sign to stop completely at the limit line and yield the right of way to other drivers who have arrived before them. Just expect that cars and trucks will “skip” you and disobey this rule! Be cautious before entering the intersection!

Ride Within Your Ability and Stay in Control: Whether your new scooter has a 50 cc engine or 150 cc engine or more, it is always best to take a training course prior to riding and to ride within your abilities. Traveling too fast, taking corners too quickly, lane splitting at higher rates of speed and other practices can lead to a crash.

Bird and Limebike Scooter Accident Claims: One recent phenomenon in both Northern and Southern California are electric scooters that can be rented and driven by anyone of any age or ability by the simple use of a smartphone app. The two most popular services are Bird scooters, which originated in Santa Monica and has since spread to all parts of Los Angeles including Venice, Beverly Hills, West Hollywood and Downtown L.A, and Limebike scooters, which originated in San Francisco and is now renting scooters in Los Angeles. While this novel approach to alternative transportation is a good idea, in theory, it comes with potential for accidents and civil liability on the part of the operators and the owners of the scooters and apps. Some common accident scenarios that are being seen are as follows:

While both the Bird and Limbike apps have liability waivers built in, this would not negate the ability to file a claim for personal injury in the event a scooter rider is harmed by the negligence of a third party. The most common scenario here would be getting hit by a car while riding a Bird or Limebike scooter. If the motor vehicle operator was negligent, a claim for personal injury or wrongful death may lie against that driver. California is a comparative negligence jurisdiction, which means that even if the scooter operator was negligent as well, it would not preclude recovery. Oftentimes there is some fault apportioned to both sides. In addition, if scooter operators strike a pedestrian due to riding on a sidewalk in violation of municipal codes or under the influence, an action may lie for the injured pedestrian against the scooter rider. If a scooter hits a pothole or defective sidewalk, a premises liability cause of action may be viable if it can be shown that the property owner either knew or should have known about the defective condition.

What to do in the Event of a Scooter Accident in Los AngelesSources
Contact Us
Practice Areas
Search this Website
Client Reviews
★★★★★
I have known Steven for some time now and when his services were required he jumped in and took control of my cases. I had two and they were handled with the utmost professionalism and courtesy. He went the extra mile regardless of the bumps in the road. I can not see me using any other attorney and I would recommend him to any of my family and friends. Josie A.
★★★★★
Steven was vital during our most trying time. He was referred by a friend after an accident that involved a family member. While he was critical and lying in the hospital, Steven was kind, patient and knowledgeable about what we were going through. Following our loss, Steven became a tough and aggressive negotiator and made sure that we receive a huge compensation. I would refer Steven in fact, this happened 2 years ago and I still speak highly of his service. Cheryl S.
★★★★★
Mr. Sweat is a pitbull in the courtroom as well as settlement negotiations - You can't have a better equipped attorney in your corner! It is a pleasure working as colleagues together on numerous cases. He can get the job done. Jonathan K.
★★★★★
Because of Steven Sweat, my medical support was taken care of. Plus, I had more money to spare for my other bills. Steven is not only an excellent personal injury lawyer, providing the best legal advice, but also a professional lawyer who goes beyond his call of duty just to help his clients! He stood up for me and helped me get through the process. I would definitely recommend. I couldn't think of any better lawyer than him. MiraJane C.
★★★★★
I must tell anyone, if you need a great attorney, Steve sweat is the guy! I had an awful car accident and had no idea where to turn. He had so much to deal with because my accident was a 4 car pile up. Not to mention all the other cars were behind me and they were not wanting to settle in any way! He never stopped working for me and had my best interest at heart! Audra W.
★★★★★
I believe I made the best choice with Steven M Sweat, Personal Injury. I was very reluctant to go forward with my personal injury claim. I had a valid claim and I needed a professional attorney to handle it. I felt so much better when I let Steven take my case. His team did everything right and I am very satisfied. Stia P.
★★★★★
I have to say that Steve has been exemplary! I met Steve at a point with my case that I was ready to give up. He took the time and dealt with all of my concerns. Most importantly, he was present and listened to what I was going through. He was able to turn things around, put me and my case on the right track! The results were better that expected! Highly recommend!! Cody A.
View More
Submit a Law Firm Client Review