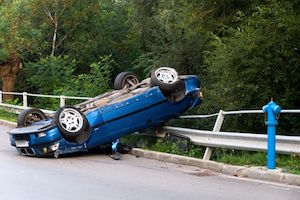 As a rollover accident attorney in California, I know that incidents where vehicles overturn can be some of the most serious types of vehicle accidents that can often result in fatalities or other catastrophic injuries to people who are inside of the vehicles. While driver negligence may be the cause of a rollover accident, some are caused by defective parts that are installed in the car. When a driver’s negligence causes a rollover accident, his or her passengers may be able to file civil lawsuits against the driver. When the accident results from car defects, the automaker may be liable for the injuries suffered by all of the car’s occupants.

According to the National Highway Traffic Safety Administration, a third of all passenger traffic fatalities that occurred in 2004 happened in vehicle rollover accidents. During that same year, 2.7 percent of people who were occupying vehicles that were involved in rollover collisions died. By contrast, 0.2 percent of people who were inside of vehicles involved in other types of collisions were killed. A total of 10,533 people in the U.S. were killed in rollover accidents in 2004.

The report also showed that the rollover rate for collisions was 15 percent when alcohol was involved and 9 percent when it was not. The study did not show any relationship between the driver’s sex and the risk of rollover accidents. Interestingly, people who used restraints were far less likely to be involved in a rollover accident than were drivers who did not. The NHTSA theorized that this was because people who use seatbelts are more prone to drive safely than are people who choose not to wear them.

Many serious injuries can be caused by rollover accidents even when people are using safety restraints. Occupants may be slammed about the inside of the vehicles as they roll over, suffering traumatic brain injuries, spinal cord injuries and fractures. Catastrophic injuries and fatalities also sometimes happen when the vehicles’ roofs collapse while the vehicles are rolling, crushing the occupants who are inside. While seat belt use reduces the risk of being ejected, some people who are using restraints may still be at least partially ejected while a vehicle is rolling over, causing them to be crushed between the vehicle and the ground. People who are totally ejected from a rolling vehicle may be killed or permanently injured when they strike the ground or surrounding objects such as trees.

Potential Manufacturer Liability When a Defect Causes a Rollover Accident

In some cases, a defect with the vehicle itself may have caused the rollover accident. When that happens, all of the vehicle’s occupants may sue the car maker through a products liability lawsuit. Other parties that might hold liability in this type of scenario also include those who were responsible for designing and making the part that was defective.

How a Personal Injury Attorney can Help

Source
Contact Us
Practice Areas
Search this Website
Client Reviews
★★★★★
I have known Steven for some time now and when his services were required he jumped in and took control of my cases. I had two and they were handled with the utmost professionalism and courtesy. He went the extra mile regardless of the bumps in the road. I can not see me using any other attorney and I would recommend him to any of my family and friends. Josie A.
★★★★★
Steven was vital during our most trying time. He was referred by a friend after an accident that involved a family member. While he was critical and lying in the hospital, Steven was kind, patient and knowledgeable about what we were going through. Following our loss, Steven became a tough and aggressive negotiator and made sure that we receive a huge compensation. I would refer Steven in fact, this happened 2 years ago and I still speak highly of his service. Cheryl S.
★★★★★
Mr. Sweat is a pitbull in the courtroom as well as settlement negotiations - You can't have a better equipped attorney in your corner! It is a pleasure working as colleagues together on numerous cases. He can get the job done. Jonathan K.
★★★★★
Because of Steven Sweat, my medical support was taken care of. Plus, I had more money to spare for my other bills. Steven is not only an excellent personal injury lawyer, providing the best legal advice, but also a professional lawyer who goes beyond his call of duty just to help his clients! He stood up for me and helped me get through the process. I would definitely recommend. I couldn't think of any better lawyer than him. MiraJane C.
★★★★★
I must tell anyone, if you need a great attorney, Steve sweat is the guy! I had an awful car accident and had no idea where to turn. He had so much to deal with because my accident was a 4 car pile up. Not to mention all the other cars were behind me and they were not wanting to settle in any way! He never stopped working for me and had my best interest at heart! Audra W.
★★★★★
I believe I made the best choice with Steven M Sweat, Personal Injury. I was very reluctant to go forward with my personal injury claim. I had a valid claim and I needed a professional attorney to handle it. I felt so much better when I let Steven take my case. His team did everything right and I am very satisfied. Stia P.
★★★★★
I have to say that Steve has been exemplary! I met Steve at a point with my case that I was ready to give up. He took the time and dealt with all of my concerns. Most importantly, he was present and listened to what I was going through. He was able to turn things around, put me and my case on the right track! The results were better that expected! Highly recommend!! Cody A.
View More
Submit a Law Firm Client Review