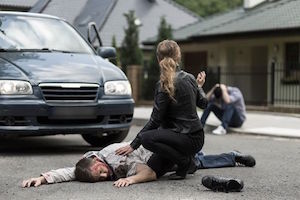 Rolling stop pedestrian accidents in California have always been a major cause of injuries and deaths. According to the National Highway Traffic Safety Administration (NHTSA), in 2014, 700 people were killed in pedestrian accidents in California. Of these accidents, over 55 percent of these events involved a vehicle turning right on a red light. Statistics for pedestrians that were injured in this manner in California are over 2,000, and these figures are estimates because many minor events are not reported.

Commonly known as the “California Stop,” the rolling stop to make a right turn at an intersection is very common. Rolling through an intersection, however, is illegal in California. California Vehicle Code 21458- 21468 states that all drivers must come to a complete stop at a red light before making a right hand turn. These same laws state that the vehicles must give pedestrians the right-of-way when crossing these intersections before turning. The law states a complete stop, not a rolling stop.

Now, however, there is legislation that is up for vote that will eliminate the ned for a complete stop before turning.

In S.B. 986, Senator Jerry Hill proposes that fines are lowered for people who make a rolling stop at a red light before turning. This bill has been unopposed so far and is believed that it will get final approval in the State Senate.

Senator Hill has stated that this Bill is the result of so many California citizens receiving red light camera tickets for not stopping completely at a red light before turning. Because so many complaints have been made about the cost of these tickets, the Senator saw fit to reduce the fines. He did not, however, see fit to want people to obey the law and stop completely at a red light and make sure that the intersection is clear before turning.

The wording in the bill is very carless and has serious implications for pedestrians in California. Instead of sticking to the laws set forth in California which states you must stop at a red light before turning, period, the new law removed this wording and sates that you must “use caution” when making a right turn on a red light.

This eliminates the need for the stop lines at all red lights because motorists will no longer have a place that they must stop to provide safety to pedestrians. They can simply roll on through and make a turn if they feel it is safe.

Safety advocates have been aggressively fighting the wording of this bill, but they have not had any success in having the wording changed or stopping the bill from advancing through the Senate.

California residents have often prided themselves on leading a healthier lifestyle than other areas of the country because of their love for walking, skating, and riding bicycles. Paths and walkways are found throughout the state encouraging people to walk, ride or skate. Bicycle lanes and pedestrian paths are continually being made throughout the state to keep up with the demand by the people for these items.

Now, with the careless wording in a bill to help reduce fines for people breaking the law, pedestrians are being placed at risk. 700 pedestrian deaths in one year could significantly increase each and every year if people are allowed to legally roll through a red light to make a right hand turn. California residents are encouraged to speak up about this dangerous bill that could impact their lifestyle.

Speak With An Attorney

If you have been injured as a pedestrian, you have specific rights under California law to seek damages for your losses. You are encouraged to speak with an attorney to see what types of compensation that you can claim for your injuries. You have the right to use the roadways as much as a vehicle. Make sure that you always obey road rules so that you remain safe, and always watch out for someone making a rolling stop at an intersection.