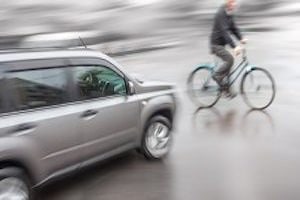 Right-hand turn bicycle accident claims are, unfortunately, an all too common occurrence in my experience in providing legal representation for cyclists. An increasing number of people in Los Angeles and throughout California are choosing to ride bicycles as a primary mode of transportation to their jobs. The League of American Bicyclists reports that nearly 1 million Americans are using their bicycles to commute. Between 2000 and 2013, the percentage of people who chose to ride bicycles to commute increased by 105 percent.[1] According to the U.S. Census Bureau, several large cities in California are leading the way for bicycle commuting.[2] While choosing to commute by bicycle is healthier for the cyclists and for the environment, the riders are much likelier to suffer serious injuries if they are involved in collisions. Bicyclists have the same rights and responsibilities when they are operating their cycles on the roads as do other motorists. Among the most common types of accidents, collisions involving motorists turning right are especially dangerous.

Rights and Responsibilities of Bicyclists

Under California Vehicle Code § 21200(a), bicyclists have the same responsibilities and rights as do other motorists when they are traveling on the state’s roadways.[3] While bicyclists are supposed to ride as far to the right as they possibly can, they are allowed to take the lane in the following circumstances under California Vehicle Code § 21202:

Some officers and other motorists fail to understand that bicyclists do have the right to take the lane when one of these exceptions apply. An experienced personal injury lawyer in Los Angeles may help you if you have been injured and have had fault wrongly attributed to you by the officer for taking the lane under one of these circumstances.

Under California Vehicle Code § 21650, bicyclists are supposed to ride in the same direction of travel as other motorists.[5] Finally, if there is a bicycle lane available, bicyclists must use it unless they are turning left, trying to avoid hazards, passing other cyclists or approaching an area where right turns are allowed.[6]

While bicycle accidents may be caused by a number of different factors, some of the most frequently occurring involve right-hand turns by motorists. There are three types of right-hand turn accidents that are especially dangerous and that bicyclists and motorists should take care to avoid.

Bicyclist to the Right of Vehicles at red Lights

In this scenario, a vehicle is waiting at a red light when a cyclist stops to the motorist’s right. When the light turns green, the motorist turns right, colliding into the bicyclist. Cyclists may avoid this type of accident by staying out of the blind spots of the motorists. They may stop slightly ahead of the stopped vehicle or directly behind it. They should be especially cautious about stopping at a red light to the right of a large bus or truck because of the difficulty these drivers have of seeing around the large vehicles. Bicyclists should not move past the vehicle when the light turns green because some drivers fail to use their right turn signals and might turn unexpectedly.

Vehicle Passes and Turns Directly in Front of Cyclist, Cutting the Cyclist Off

Another common right-hand accident scenario involves a car that is traveling faster than a cyclist near an intersection. The vehicle then suddenly turns right across the cyclist’s path, causing the cyclist to collide into the side of the vehicle. In order to avoid this type of collision, bicyclists can take the lane so that they are more visible when they are approaching intersections where right turns are allowed. They should also avoid riding on sidewalks before crossing the streets because doing so might make them invisible to drivers who are turning right. Before getting to the intersection, bicyclists should glance in their handlebar mirrors so that they can see the vehicles that are approaching them.

Passing Slow-Moving Vehicles or Bicycles on the Right

Another common type of right-hand bicycle collision involves cyclists who are passing slow-moving vehicles or other cyclists on the right when they are approaching areas where right-hand turns are allowed. The cars then suddenly turn right, colliding with the cyclists. You can avoid this type of collision by not passing cars or cyclists on the right. Instead, take the lane and pass the slower vehicles on the left.

Motorists in California owe a duty of reasonable care to bicyclists who are traveling on the roads around them. A part of this duty includes the duty to follow all relevant traffic laws. Examples of negligent driving behaviors may include the following:

If a driver committed a traffic violation which caused the driver to have a right-hand collision with a bicyclist, the violation may be used to show that the driver was negligent per se.

In order to prove negligence, cyclists must show that the driver owed a duty of care to them and that the driver violated the duty that he or she owed. The cyclist must then show that the breach of duty was the direct or proximate cause of the accident, that the cyclist was injured and suffered financial harm. An experienced Los Angeles personal injury attorney may help you to gather evidence that proves liability in an effort to strengthen your claim.

NOTE: For more information on bicycle accident claims and what an attorney can do to help those injured by being struck by a car while riding a bike go to our related page here: Los Angeles Personal Injury Attorney | Bicycle Accidents

If you have suffered serious injuries or your loved one was killed in a right-hand bicycle accident, you might have legal rights. Contact an experienced Los Angeles bicycle accident lawyer to schedule your free consultation today. Toll Free: 866-966-5240.

Resources
Contact Us
Practice Areas
Search this Website
Client Reviews
★★★★★
I have known Steven for some time now and when his services were required he jumped in and took control of my cases. I had two and they were handled with the utmost professionalism and courtesy. He went the extra mile regardless of the bumps in the road. I can not see me using any other attorney and I would recommend him to any of my family and friends. Josie A.
★★★★★
Steven was vital during our most trying time. He was referred by a friend after an accident that involved a family member. While he was critical and lying in the hospital, Steven was kind, patient and knowledgeable about what we were going through. Following our loss, Steven became a tough and aggressive negotiator and made sure that we receive a huge compensation. I would refer Steven in fact, this happened 2 years ago and I still speak highly of his service. Cheryl S.
★★★★★
Mr. Sweat is a pitbull in the courtroom as well as settlement negotiations - You can't have a better equipped attorney in your corner! It is a pleasure working as colleagues together on numerous cases. He can get the job done. Jonathan K.
★★★★★
Because of Steven Sweat, my medical support was taken care of. Plus, I had more money to spare for my other bills. Steven is not only an excellent personal injury lawyer, providing the best legal advice, but also a professional lawyer who goes beyond his call of duty just to help his clients! He stood up for me and helped me get through the process. I would definitely recommend. I couldn't think of any better lawyer than him. MiraJane C.
★★★★★
I must tell anyone, if you need a great attorney, Steve sweat is the guy! I had an awful car accident and had no idea where to turn. He had so much to deal with because my accident was a 4 car pile up. Not to mention all the other cars were behind me and they were not wanting to settle in any way! He never stopped working for me and had my best interest at heart! Audra W.
★★★★★
I believe I made the best choice with Steven M Sweat, Personal Injury. I was very reluctant to go forward with my personal injury claim. I had a valid claim and I needed a professional attorney to handle it. I felt so much better when I let Steven take my case. His team did everything right and I am very satisfied. Stia P.
★★★★★
I have to say that Steve has been exemplary! I met Steve at a point with my case that I was ready to give up. He took the time and dealt with all of my concerns. Most importantly, he was present and listened to what I was going through. He was able to turn things around, put me and my case on the right track! The results were better that expected! Highly recommend!! Cody A.
View More
Submit a Law Firm Client Review