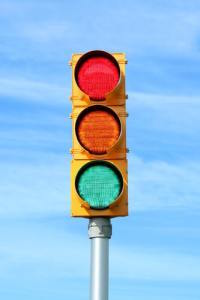 Red and yellow light accidents in California are some of the most serious crashes that can happen. Intersection collisions in are usually caused by a driver speeding up the “beat the light” or drivers anticipating a stop by oncoming traffic and turning left. This happens at busy intersections all over the Golden State include urban and suburban areas like Los Angeles, Orange County, San Diego and the Inland Empire. In fact, according to the Federal Highway Administration, although only 10 percent of all intersections in the U.S. are controlled by traffic lights, intersection with such signals are the site of fatal accidents one third of the time!

We all know red means stop and yellow means that light is about to turn red but, what does the exact language from the California Vehicle Code state? The pertinent legal codes state as follows:

California Vehicle Code 21452: “(a) A driver facing a steady circular yellow or yellow arrow signal is, by that signal, warned that the related green movement is ending or that a red indication will be shown immediately thereafter.” 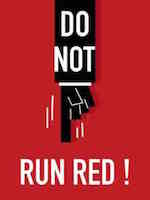 “(b) Except when a sign is in place prohibiting a turn, a driver, after stopping as required by subdivision (a), facing a steady circular red signal, may turn right, or turn left from a one-way street onto a one-way street. A driver making that turn shall yield the right-of-way to pedestrians lawfully within an adjacent crosswalk and to any vehicle that has approached or is approaching so closely as to constitute an immediate hazard to the driver, and shall continue to yield the right-of-way to that vehicle until the driver can proceed with reasonable safety. (c) A driver facing a steady red arrow signal shall not enter the intersection to make the movement indicated by the arrow and, unless entering the intersection to make a movement permitted by another signal, shall stop at a clearly marked limit line, but if none, before entering the crosswalk on the near side of the intersection, or if none, then before entering the intersection, and shall remain stopped until an indication permitting movement is shown.”

As a car accident lawyer practicing in California, I can say that violating the above stated rules of the road probably lead to more wrecks than any other single cause. The scenarios generally fall into categories as follows:

Who May Be Held Liable for Money Damages in These Accidents and how do I Prove My Case?

Violations of California Vehicle Codes can be deemed “negligence per se” under California law. What does this mean? It means that a person who commits a moving violation such as failing to slow down at a yellow light or come to a complete stop at a red light, can be deemed “at fault” for violating a law that is meant to protect individuals from the harm of being struck in an intersection. Sometimes, a law enforcement official will investigate the accident scene and issue a citation to the violating driver. Many more times, it is up to the injured party to obtain sufficient admissible evidence to prove such a violation. This can be done through obtaining traffic signal data; statements from witnesses at the scene; examination and retention (through photographs or other means) of physical evidence such as skid marks (or lack thereof), location of property damage, the type and extent of bodily injury suffered by a driver, passenger, pedestrian or cyclist, and expert accident reconstruction of the incident based upon all of the above.

If you are the victim of a car crash involving a vehicle speeding up through a yellow light or running a red or both and sustain catastrophic bodily harm or the death of a loved one, it is always best to consult with an accident lawyer familiar with these types of claims. Steven M. Sweat, Personal Injury Lawyers, APC has been investigating and prosecuting intersection accident claims in Los Angeles, Orange County, San Diego and the Inland Empire for two decades. We offer free consultation and we never charge a fee unless and until we recover money for the victim or their family. Call today for a free evaluation of your claim: Toll Free 24/7.