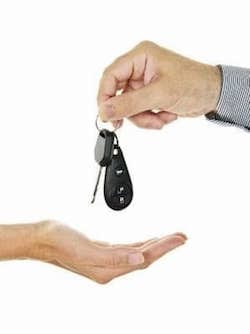 Recovering for personal injury caused by a loaner car crash in California can be tricky! As a California car accident attorney, this is one of the most common traffic collision scenarios that I see. The registered owner of a motor vehicle loans their automobile to a third party who then wrecks the car, causing property damage and bodily harm to the victim. What are the accident victim’s options for recovery of medical bills, lost wages, pain and suffering and all the other remedies to which they may be entitled. As we know from my prior posts, every person in California is responsible for their own actions or in actions and can be held liable if they fail to act reasonably (i.e. if they are negligent) but, as we also know, we need to find a pocket from which to collect damages, if we hope to successfully obtain compensation and that usually comes in the form of automobile insurance coverage. The first thing a good personal injury attorney would explore in this situation is if there was insurance coverage for the driver themselves that may apply. Oftentimes, however, there is no coverage or limited coverage and the lawyer must also analyze the following:

California Liability for the Permissive Use of an Automobile

California Vehicle Code section 17150 provides as follows: “Every owner of a motor vehicle is liable and responsible for death or injury to person or property resulting from a negligent or wrongful act or omission in the operation of the motor vehicle, in the business of the owner or otherwise, by any person using or operating the same with the permission, express or implied, of the owner.” Therefore, if the injured person is harmed by a loaned vehicle, the owner is responsible so long as the following are proven:

Negligent Entrustment of a Motor Vehicle Under CA Law

Oftentimes, serious and catastrophic injuries with medical expenses and emotional tolls or, worse yet, a death occurs as a result of a freeway or surface street smash up. Victims and their families in these instances are clearly entitled to more than just $15-30,000 in bodily injury compensation. Can they ever recover more than this? Depending upon the facts, the answer is YES. In addition to simply showing that the car was being driven by a negligent operator with the permission of the registered owner, the plaintiff would need to show that the owner was also negligent in loaning the automobile to the driver. This is what is known as a negligent entrustment theory of recovery and requires proving the following:

This would allow for the wounded person to recover for beyond just the “permissive user” limits. It would also invoke a duty on the part of the owner’s insurance carrier to defend the claim fully and to pay in excess of the 15/30 limits for injury if the negligent entrustment theory has merit. Facts sufficient to prove this theory can come in many forms but, the most common is the “designated driver” scenario where an intoxicated vehicle owner allows someone else to operate their motor vehicle but, that person is also under the influence of alcohol or drugs and the owner knows or SHOULD know that they are drunk or “buzzed”. Other instances may include an owner who knows or should have known a driver has no license, a bad driving record, a history of accidents, a disability such as being prone to seizures or having problems with their eye sight, hearing or other issues that affect their ability to drive.

The other issue that should always be analyzed in the case of a loaner car crash is the ability to seek compensation or additional moneys from the injured party’s own auto insurance company. Uninsured motorist coverage may apply where, for whatever reasons, the above theories do not apply and there is no insurance coverage for the loaner vehicle. Additionally, if the facts are such that there is liability but, this is limited to the $15,000/$30,000, an underinsured motorist claim may be made if the policy of the injured person has coverage in excess of these amounts. (e.g. if the person harmed has coverage of $100,000 for bodily injury, they would be able to exhaust the $15,000 in liability for the permissive owner and then collect an additional $85,000 assuming the value of their claim justified this additional recovery).

These issues get tricky. Full recovery in loaner auto crashes requires full and complete analysis of the facts surrounding the incident, investigation of the driver and the owner to determine the circumstances and scope of the permission to use the car and the relationship between the driver and owner (e.gs. Are they relatives? Did the owner know the person to whom he loaned his car? Were the driver and owner out drinking or partying that night?). Competent legal counsel can also fully analyze coverage for the driver, the owner and the injured party (in the case of UM and UIM claims). This makes it critically important to hire a good attorney and to do so sooner rather than later!