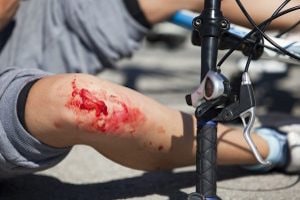 Rear end bicycle collisions account for up to 40 percent of all bike accidents in the U.S. according to a recent study conducted by the League of American bicyclists. This is certainly true in urban areas of California, like Los Angeles where bike lanes are not as prevalent as they should be and where motorists fail to share the road like they should. As an attorney that represents bike accident victims, I thought I would share some of the more common rear end bicycle mishap scenarios with you and what you can do to protect yourself as a cyclist.

As a bike rider in a big city whether you are commuting on a daily basis or just a weekend warrior out for a Sunday ride on two wheels, you need to keep one principal in mind: While you have the absolute right to use the roadway like any other “vehicle” as mandated by California Vehicle Code, this does not mean that motor vehicles operators can or will see you or share the road courteously at all times. The rule of thumb is to “ride like you are invisible” and just assume that they do not see you. Here are some of the more common scenarios:

Hopefully, you will use these and other techniques to avoid being struck from the back end of your bicycle. Unfortunately, due to inattention on the part of drivers and sometimes outright hostility, rearward cycle mishaps can and do occur especially in areas with heavy traffic like Los Angeles, Orange County and San Diego. Getting hit from behind on a bike can cause the cyclist to be thrown into the air, lay the bike down, being run over while on the pavement, or many other scenarios resulting in major impact to the body. This can result in serious injuries like fractures the the arms, legs or pelvis. The first priority in these situations is seeking immediate medical attention. After trauma care is received, the next priority should always be consulting with a lawyer who is familiar with rear end bicycle collision claims prior to making any statements to auto insurance representatives. Having a legal advocate and buffer can mean the difference between being stuck with medical expenses or being able to receive full and complete compensation for injuries. A quality injury attorney can assess the facts, investigate the scene, speak with witnesses and even hire experts, if necessary, to reconstruct the incident and analyze the legal issues of fault.