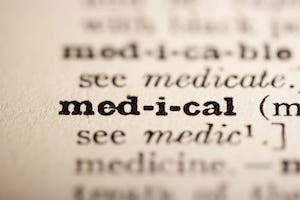 A personal injury medical term glossary is a resource page that I thought would be helpful to persons who have suffered an injury and want more information. Oftentimes medical records contain terminology that is confusing to the lay person. Here are a few terms that come up quite often in claims related to bodily harm due to trauma suffered as as result of negligence or wrongdoing:

Abduction: Movement of a body part such as a limb away from the mid-line axis or center of the human body (e.g. muscles that pull arms or legs away from the body are called “Abductors.”

Adduction: In essence, the opposite of ABduction (i.e. the movement of body parts towards the center of the body) with “Adductors” being the muscles that perform this function.

Artery: Vessel that carries blood away from the heart.

Arthroscope: An optical tube that is inserted into an incision in the body and used to examine potentially damages tissue, usually in joints.

Articulation: A place where two or more bones come together.

Atrophy: A decrease in the size of organ or muscle tissue due to lower blood flow or non-use.

Brain Scan: The brain is usually scanned to detect damage in one of two ways: CT or CAT Scan or MRI. This can be “with or without contrast” meaning with or without a dye substance being injected into the brain tissue.

Bursa: A gel-like filled sac located in areas of the body where friction could develop such as between joints.

C-Spine Series: A series of x-rays of the upper (neck) portion of the spine including x-ray views from the front, side and diagonally – This is usually ordered after any type of major trauma to the cervical spine such as in an auto accident.

Carotid Artery: Large artery located on the side of the neck next to the Adam’s Apple. This is often used as a point to check a patient’s pulse.

Carpal Tunnel Syndrome: A condition caused by pressure on the median nerve running through the wrist resulting in pain, numbness and other symptoms, most often caused by repetitive motion injuries but, also can be due to trauma.

Cephalgia: Pain in the head (headache)

Coccyx: The lowest portion of the spine (commonly called the “tailbone”).

Comminuted Fracture: A bone that has been crushed or splintered.

Compound Fracture: Fracture where the bone is protruding through the skin.

Concussion: Condition caused when the head or body is shocked or jarred resulting in the brain being jostled inside the skull (for more information, see our brain injury page).

Diskectomy: A surgery to remove all or a portion of an intravertebral disk (a disk between two individual vertebrae in the spine)

Effusion: Escape of bodily fluids into a portion of a body part or tissue.

Embolism: A portion of air, fat, blood clot, plague or other mass that blocks the flow of blood through an artery.

Epidural: The space inside the spinal column between the “dura” (membrane that covers the spinal cord) and the vertebral canal. Most often used in association with a procedure called “Epidural Injections” where this area is injected with anti-inflammatory drugs to shrink the disk material that is causing pressure on a nerve and causing pain, numbness or other symptoms.

Fistula: Abnormal drainage of fluid between two organs or between organs and the outer skin layer. The fluid is most often associated with drainage of pus from an abscess.

Flexion: The ability to bend all or a portion of the body.

Fracture: A break or rupture in a bone.

Hematoma: A collection of blood in a localized area.

Hernia: A protrusion of an organ through a tear or abnormal opening in the wall of tissue. In personal injury claims, this is often used in association with “herniated discs” which are vertebral disks that are protruding abnormally due to a trauma.

Herniated Nucleus Pulposis (HNP): Condition in which the center of an intervertebral disk has protruded outside of the tissue that connects the adjacent vertebrae.

Infarction: Area of dead tissue resulting from a lack of sufficient blood flow.

Intervertebral: Between vertebrae (the small bones that form the human spine).

Ischemia: Lack of adequate blood flow due to a rupture, blockage or constriction of a blood vessel.

Laparotomy: A surgicial incision in the abdomen.

Lesion: Often used to describe any type of abnormality in organ tissue.

Lordosis: The curvature of the spine. Often used to describe an abnormal curvature due to some type of spinal trauma.

Meninges: The three membranes that surround the brain and spinal cord.

Myelogram: An x-ray film taken of the spinal canal after injection of a dye material.

Neuralgia: Pain along the path of a nerve.

Occipital: The back portion of the head.

Open Reduction: Repair of a fracture by re-positioning the bone pieces after surgical incision.

Orthopedics: The branch of medical specialty that deals with the diagnosis and treatment of the skeletal system and associated structures.

Osteoarthritis: So called “degenerative” breakdown of the cartilage in the joint surfaces and the enlargement of surrounding bone tissue.

Osteomyelitis: Inflammation of the bone including the marrow.

Paravertebral: The area on the sides and surrounding the vertebrae.

Paraplegia: Loss of the use of one the lower part of the human body including the legs due to paralysis (See our spinal injury page).

Peritoneal Cavity: Abdominal cavity where containing many of the body’s internal organs.

Phalanges: Bones in the fingers and toes.

Plasma: The liquid portion of the blood after all blood cells have been removed.

Psychiatrist: Medical doctor who specializes in the diagnosis and treament of mental or emotional illnesses. Able to prescribe medications.

Psychologist: Health care professional (non-medical doctor but, usually holds a Phd in Psychology) who diagnoses cares and treats persons suffering from disturbances in their emotional health.

Quadriplegia: Paralysis of both the arms and legs (Also see our page on spine injuries).

Radiculopathy: Injury to the spinal nerve root, which causes pain or numbness to radiate along the path of the nerve (A common example would be impingement of the sciatic nerve root causing pain down the buttocks and leg).

Range of Motion: The ability of a body part such as a limb to move around an axis (measured in degrees). Limited range of motion is a common condition following trauma.

Reduction: Sometimes also referred to as an “open reduction”. This is a surgical technique to repair a fracture or dislocation of a bone or joint.

Reflex Sympathetic Dystrophy: Trauma to the sympathetic nervous system caused by damaged blood vessels or nerves and can result in swelling, pain, numbness and changes in skin color to the affected area.

Resection: Surgical removal of a portion of an body organ.

Sacrum: Triangular group of small bones at the lowest portion of the spine to which the tailbone is attached.

Skull Series: A series of x-rays of the human skull from multiple angles including frontal, side and oblique. Usually ordered following a head trauma and sometimes in conjunction with a head CT scan or MRI.

Spondylitis: Inflammation of the spinal vertebrae.

Stenosis: Narrowing of a body passage such as a blood vessel (artery or vein).

Thoracic Spine: The 12 vertebrae of the mid back starting at the bottom of the neck (bottom of the cervical spine) and going to the mid-abdomen (the top of the lumbar spine).

Vein: A blood vessel that carries blood back to the heart.

Whiplash: Trauma to the cervical spine due to a sudden back and forth movement (most commonly associated with rear end collision auto accidents).