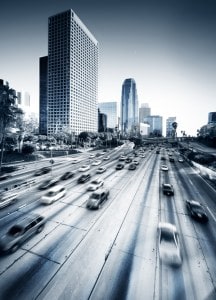 As a Los Angeles car accident lawyer for over 20 years, I have seen many common car crash scenarios and types of injuries sustained in traffic collisions in the City of Los Angeles. I thought I would post some information about these common auto collisions claims that I have seen and personally worked with as well as what you can do to protect yourself as an accident victim against having to be responsible for medical expenses, lost income and other consequences of being injured in a car accident in Los Angeles.

The greater Los Angeles area (or what many call the “Southland”) is comprised of the City and County of Los Angeles, Orange County, Riverside and San Bernardino and Ventura Counties. According to the most recent census, it is the second largest metropolitan area in the U.S. with an estimated combined population of approximately 18 million people. The City of L.A. itself, which is comprised of downtown, south L.A., mid-city, the westside and the San Fernando Valley, is home to approximately 4 million persons. The main mode of transportation remains the automobile and mass transit is still secondary in the region. There are a dozen major freeways that criss-cross the L.A. Basin including the major east-west arteries of the 10 freeway, 60 freeway, and the 210 and the 110 freeways and the major north-south thoroughfares of the 5 freeway, the 101 freeway and the 405 freeway. Major arterial streets like Sunset Blvd., Wilshire Boulevard, Santa Monica Blvd., and Ventura Boulevard connect many thousands of surface streets through neighborhoods from Culver City to Santa Monica to West Hollywood and throughout “the Valley” from areas like Encino and Sherman Oaks to Chatsworth and Northridge. Connecting “the Valley” with “the City” are mainly the 101 the 405 and the 170 along with the various canyon roads like Laurel Canyon Boulevard and Coldwater Canyon Blvd. From downtown L.A. to Long Beach, the surface streets are laid out in a vertical pattern with east-west streets numbered from 1 to 266th Street and north-south streets with names including major arteries like Crenshaw Boulevard and Hawthorn Blvd. connecting municipalities in the South Bay like Torrance, CA. Because most Angelenos travel by car, traffic congestion in Los Angeles is among the worst in the nation. During the peak rush hour periods of 7 a.m. to 10 a.m. and 3 p.m. to 7 p.m., it is estimated that hundreds of thousands of commuters are traveling the areas freeways and surface streets at any given time.

It is estimated that there is motor vehicle accident approximately every minute and 30 seconds in the Greater Los Angeles area! While most of these incidents are minor fender benders, major traffic collisions causing serious personal injuries or even wrongful death can and do occur on a frequent basis. In fact, according to statistics from various agencies including the National Highway Traffic Safety Administration and the California Department of Motor Vehicles, Los Angeles County consistently ranks number one in the State of California for both total numbers of traffic accidents and the highest number of fatal traffic collisions. In my experience as a long-term Los Angeles car accident lawyer, I have seen many common scenarios that seem to play out time and time again on our Southland roadways. While some of these are just bad luck mishaps, numerous studies based on many years of crash data in both the U.S. and elsewhere have concluded that 93 % of traffic collisions are caused by driver error of some type including intoxication or negligence. I would categorize these under freeway accidents and surface street accidents as follows: 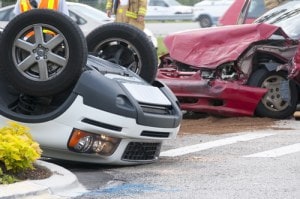 No one wants to be involved in a motor vehicle collision. However, if you live in the Greater Los Angeles Basin, as discussed above, your chances of being in a crash are higher than many other cities or regions. Here are some helpful tips on what to do at the scene:

Hiring a Los Angeles car accident lawyer, or legal counsel who has had consistent results filing claims and litigating cases throughout Greater Los Angeles is essential to obtaining the maximum value on your accident claim. Our personal injury law firm works on a contingency fee basis, which means we charge no upfront fees and only collect attorney's fees when your claim is resolved. We also look to resolve claims in a way that maximizes the net recovery to you factoring the costs of filing a lawsuit versus and out of court settlement. If you live anywhere in Los Angeles County from the Antelope Valley in the North to South L.A. or from the west side the East L.A., the chances of being involved in a car accident are great no matter how good of a driver you are. Hiring experienced automobile accident attorneys who know the Los Angeles Superior Court system, regularly appear before judges and try cases in all of the L.A. County Court branches including Stanley Mosk Courthouse, Torrance, Norwalk, Pasadena, Chatsworth, Antelope Valley or Pomona could mean the difference between “settling for what you get” or getting all that you deserve! Call Steven M. Sweat, Personal Injury Lawyers, APC, the zealous legal advocates in L.A. for a free attorney consultation anywhere in Socal at 866-966-5240.

Sources
Car Accident and Injury Statistics
Contact Us
Practice Areas
Search this Website
Client Reviews
★★★★★
I have known Steven for some time now and when his services were required he jumped in and took control of my cases. I had two and they were handled with the utmost professionalism and courtesy. He went the extra mile regardless of the bumps in the road. I can not see me using any other attorney and I would recommend him to any of my family and friends. Josie A.
★★★★★
Steven was vital during our most trying time. He was referred by a friend after an accident that involved a family member. While he was critical and lying in the hospital, Steven was kind, patient and knowledgeable about what we were going through. Following our loss, Steven became a tough and aggressive negotiator and made sure that we receive a huge compensation. I would refer Steven in fact, this happened 2 years ago and I still speak highly of his service. Cheryl S.
★★★★★
Mr. Sweat is a pitbull in the courtroom as well as settlement negotiations - You can't have a better equipped attorney in your corner! It is a pleasure working as colleagues together on numerous cases. He can get the job done. Jonathan K.
★★★★★
Because of Steven Sweat, my medical support was taken care of. Plus, I had more money to spare for my other bills. Steven is not only an excellent personal injury lawyer, providing the best legal advice, but also a professional lawyer who goes beyond his call of duty just to help his clients! He stood up for me and helped me get through the process. I would definitely recommend. I couldn't think of any better lawyer than him. MiraJane C.
★★★★★
I must tell anyone, if you need a great attorney, Steve sweat is the guy! I had an awful car accident and had no idea where to turn. He had so much to deal with because my accident was a 4 car pile up. Not to mention all the other cars were behind me and they were not wanting to settle in any way! He never stopped working for me and had my best interest at heart! Audra W.
★★★★★
I believe I made the best choice with Steven M Sweat, Personal Injury. I was very reluctant to go forward with my personal injury claim. I had a valid claim and I needed a professional attorney to handle it. I felt so much better when I let Steven take my case. His team did everything right and I am very satisfied. Stia P.
★★★★★
I have to say that Steve has been exemplary! I met Steve at a point with my case that I was ready to give up. He took the time and dealt with all of my concerns. Most importantly, he was present and listened to what I was going through. He was able to turn things around, put me and my case on the right track! The results were better that expected! Highly recommend!! Cody A.
View More
Submit a Law Firm Client Review