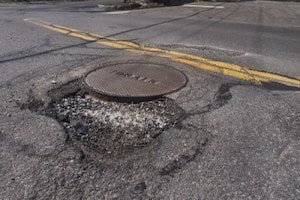 As a Los Angeles bicycle pothole accident attorney, I know that the City of Los Angeles does not always inspect and maintain its streets as often as it should. While a pothole may damage a motor vehicle but, not harm the occupants, bicyclists are especially vulnerable to having accidents that are caused by defects in the roadways such as potholes which end up causing serious bodily injuries. While cyclists may be able to avoid these accidents by being alert, potholes frequently are not noticed until it is too late to avoid them. In some cases, the potholes are difficult to see because of visibility issues during the early morning or evening hours. If you have been injured in a bicycle accident because of a road defect, you may have grounds to file a claim against the city. While it might be difficult to bring a claim against the city, doing so can help you to recover compensation for your medical costs, lost wages and other damages. It can also provide a financial incentive for the city to improve its infrastructure so that future accidents might be prevented. An experienced personal injury attorney may help you to recover compensation for your losses.

What is California Law on Bike v. Pothole Claims?

In California, property owners owe a duty of care to keep their properties in reasonably safe conditions for people who might come onto them. If you were injured while you were riding your bike on private property because you rode over a hole, the standard that was established in Rowland v. Christian will apply. This case abolished the previously held common law rule that differentiated on the basis of why the visitor came onto the property. Under this standard, all property owners owe a duty to keep their property in a reasonably safe condition regardless of the status of visitors. In order to prevail, you must be able to show the following:

If the hole that injured you was located on public property or on a public street, you can file a claim based on a dangerous condition of public property. In order to do this, you must file a government tort claim with the municipality where the incident happened no more than six months afterward. In almost all cases, these claims are summarily denied without further explanation, which triggers a second deadline for filing a lawsuit.

Lawsuits against public entities are always vigorously defended, but they can be won. Prevailing on your claim against the government will require you to file a lawsuit in court and to conduct discovery. You will need to request documentation of any prior inspections or repairs that were completed in the area where your accident happened, and you may need to depose city officials.

In order to prevail on your claim against the government, you will have to show several things, including all of the following:

What to do After you Have Been Injured by Striking a Hole on Your Bike in Los Angeles?

Immediately after you strike a hole and are injured, you should promptly seek medical attention. If you need to do so, call 911 and request an ambulance. Try to take photographs of the hole immediately with your smartphone. In order to give a perspective of the size and depth of the hole, use an object like a bike pump or water bottle. If you can’t take photos because of your injuries, try to have someone else photograph it for you as soon as possible after you seek medical care. This is important because the city often fills in potholes promptly when it is put on notice that accidents have happened, which can make it impossible to determine the exact depth and dimensions of the hole.

When you go to the hospital, tell all of the medical providers that you see that your injuries were caused when you hit a hole and were thrown from your bike. This is important for two reasons. First, it lets your medical staff understand the dynamics of your fall so that they can properly assess your injuries. Second, it documents the incident so that you can show that later claims that your injuries were caused by something else are inaccurate. Finally, make certain to report the claim.

When you have been seriously injured in a bicycle accident that was caused by a pothole on a private or public property, it is best that you get help from an experienced lawyer to file your claim. You should try to talk to a lawyer as soon as you can after the incident has happened. If the property owner was a governmental agency or the city, you have a very short time frame within which you must file. Even if the incident happened on private property, it is still best to get legal help as soon as possible. Contact our office today to schedule your consultation so that you might be able to get help with your claim.

Resources
Contact Us
Practice Areas
Search this Website
Client Reviews
★★★★★
I have known Steven for some time now and when his services were required he jumped in and took control of my cases. I had two and they were handled with the utmost professionalism and courtesy. He went the extra mile regardless of the bumps in the road. I can not see me using any other attorney and I would recommend him to any of my family and friends. Josie A.
★★★★★
Steven was vital during our most trying time. He was referred by a friend after an accident that involved a family member. While he was critical and lying in the hospital, Steven was kind, patient and knowledgeable about what we were going through. Following our loss, Steven became a tough and aggressive negotiator and made sure that we receive a huge compensation. I would refer Steven in fact, this happened 2 years ago and I still speak highly of his service. Cheryl S.
★★★★★
Mr. Sweat is a pitbull in the courtroom as well as settlement negotiations - You can't have a better equipped attorney in your corner! It is a pleasure working as colleagues together on numerous cases. He can get the job done. Jonathan K.
★★★★★
Because of Steven Sweat, my medical support was taken care of. Plus, I had more money to spare for my other bills. Steven is not only an excellent personal injury lawyer, providing the best legal advice, but also a professional lawyer who goes beyond his call of duty just to help his clients! He stood up for me and helped me get through the process. I would definitely recommend. I couldn't think of any better lawyer than him. MiraJane C.
★★★★★
I must tell anyone, if you need a great attorney, Steve sweat is the guy! I had an awful car accident and had no idea where to turn. He had so much to deal with because my accident was a 4 car pile up. Not to mention all the other cars were behind me and they were not wanting to settle in any way! He never stopped working for me and had my best interest at heart! Audra W.
★★★★★
I believe I made the best choice with Steven M Sweat, Personal Injury. I was very reluctant to go forward with my personal injury claim. I had a valid claim and I needed a professional attorney to handle it. I felt so much better when I let Steven take my case. His team did everything right and I am very satisfied. Stia P.
★★★★★
I have to say that Steve has been exemplary! I met Steve at a point with my case that I was ready to give up. He took the time and dealt with all of my concerns. Most importantly, he was present and listened to what I was going through. He was able to turn things around, put me and my case on the right track! The results were better that expected! Highly recommend!! Cody A.
View More
Submit a Law Firm Client Review