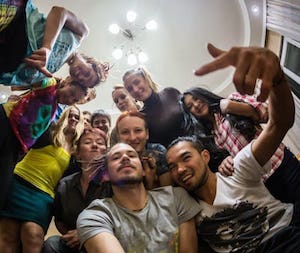 House party injury claims in California, like anywhere else can and do happen when people decide to throw a social gathering in their home and don’t take adequate precautions to keep people from being hurt. Whether you live in an apartment or condominium in a large urban area like Los Angeles, San Diego or San Francisco or in a house in a more suburban area like the San Fernando Valley, San Gabriel Valley, San Joaquin Valley, Orange County or the Inland Empire there are times when homeowners and tenants want to “throw a big bash” for a special occasion like a holiday or birthday. Usually the serving of alcohol is involved, which can lead to some persons overindulging, getting drunk and causing problems such as assaults and battery or, even worse, driving under the influence and crashing a vehicle. This can lead to both party participants and other people outside the party being injured or killed. What do the laws of the State of California provide as far as seeking monetary compensation through the civil justice system in these scenarios?

In general, California law prohibits being able to collect from a so-called “social host” (i.e. a private person not in the business of selling alcohol) who throws a party at their home or apartment. This is found in the California Civil Code and the statute reads as follows:

California Civil Code section 1714(c): “Except as provided in subdivision (d), no social host who furnishes alcoholic beverages to any person may be held legally accountable for damages suffered by that person, or for injury to the person or property of, or death of, any third person, resulting from the consumption of those beverages.” The Exception: Furnishing Alcoholic Beverages to Minors

The exception to this normal rule is when the host of the party knowingly serves alcohol to persons under the age of 21 years. A cause of action may lie for any personal injury or death that results from engaging in the provision of beer, wine or liquor to underage drinkers. Based upon California Civil Code section 1714(d), the law requires that the following elements be shown:

California Civil Jury Instruction 427: “Plaintiff (person claiming injury or the family of a wrongful death victim) claims defendant (person or persons being sued) is responsible for [his/ her] harm because defendant furnished alcoholic beverages to him/her, a minor, at defendant’s home.

To establish this claim, plaintiff must prove all of the following:

1. That defendant was an adult;

3. That defendant knew or should have known that he/she was less than 21 years old at the time;

4. That plaintiff was harmed by the minor; and

5. That defendant’s furnishing alcoholic beverages to the minor or minor(s) was a substantial factor in causing plaintiff’s harm.”

In fact, a recent California Supreme Court decision, Ennabe v. Manosa, (2014) 58 Cal.4th 697, this exception was further clarified (some might say expanded). The case involved an teenager who decided to throw a party at their home while their parents were away. A “cover fee” was charged to enter the party and alcohol was purchased with these funds. The majority of the partiers were under 21. One of the revelers left that party clearly intoxicated and, while driving under the influence, crashed his car into someone and killed them. The deceased relatives sued the homeowner (parents). The California Supreme Court held that the “social host immunity” rule did not apply because by charging a fee and purchasing alcohol, the host had become, in essence, a “seller” of booze who was serving obviously intoxicated minors.

The need for promptly seeking legal advice from an attorney following an injury or death resulting from underage drinking at a house party in California:

Given the general rule of immunity for social hosts and the exception of having to show either that adults were knowingly serving underage drinkers who were obviously intoxicated or that the “social host” was really a “seller” of alcohol by charging entry fees and buying liquor with the money, it is very important to seek out the advice of counsel in these cases. Prompt investigation is necessary to confirm facts and preserve evidence. When these claims are filed, the homeowners insurance company will step in to defend the claim and will, almost certainly, claim that “social host immunity” applies. Having a zealous legal advocate who can provide evidence of liability is crucial to recovery of damages for injury or death in these cases. Steven M. Sweat, Personal Injury Lawyers, APC is experienced in handling these types of claims and provides a free consultation regarding any same or similar claim. Our toll free number statewide in California is 866-966-5240 or our Los Angeles number is 310-592-0445.