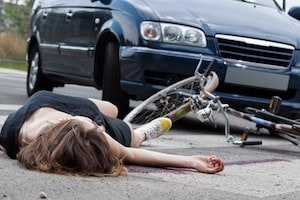 Front impact bicycle accidents comprise a disproportionate number of crashes causing serious injury or death every year. Choosing to ride bicycles instead of driving motor vehicles is both healthier for the cyclists and better for the environment. Bicyclists face heightened risks of being seriously injured in collisions with motor vehicles, and it is important that they take precautionary measures to minimize their risks. Unlike the occupants of motor vehicles, cyclists do not have a protective metal frame that surrounds them and absorbs some of the physical forces that are released in accidents. This means that they are much likelier to suffer catastrophic injuries when they are struck by vehicles. Of all of the different bicycle accident scenarios, being struck by the front of a car or other motor vehicle is the most common type of auto versus bike crash as well as the type that is the likeliest to cause death or serious injury according to recent studies.

Being injured in a bicycle accident may leave you with debilitating injuries that may impact you for the rest of your life. If you were struck by a car, you may need legal help to assert your rights. An experienced bicycle accident lawyer in Los Angeles may build a strong case that proves the liability of the motorist so that you may be likelier to be fairly compensated for your losses. Contact a personal injury lawyer today for help with your bicycle accident.