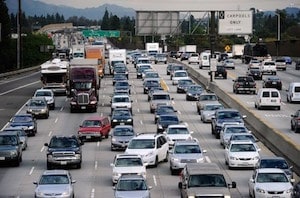 Freeways are highways with no tolls and with on-ramps and off-ramps. They provide the primary means of transportation for many urban areas including the Golden State. In metropolitan communities, freeways can consist of three, four and even five lanes of traffic, which can include high occupancy vehicle (HOV) lanes, commonly called “car pool lanes.” It is estimated that one-third of the land area in Los Angeles County is covered by freeways and thousands of people use them to travel every day.

The main thoroughfares in the City of Angels are the 101 (Hollywood Freeway), the 5 (Santa Ana Freeway), the 10 (San Bernardino Freeway) and the 210 (San Gabriel Freeway). Because of the large number of freeways accessible and the sheer volume of traffic on each one, it is not surprising that many (if not the majority) of traffic collisions occur on one of these major thoroughfares.

Victims of freeway accidents often sustain devastating injuries and incur substantial losses. At the Steven M. Sweat, Personal Injury Lawyers, APC, our team has decades of experience representing the rights and interests of accident victims in and around Los Angeles, including freeway accidents. These cases can often be complex and can involve significant amounts of potential compensation, so you want an attorney on your side who has the resources and litigation experience to successfully pursue the recovery you deserve. If you have been in a freeway accident, please do not hesitate to call our office today at 866-966-5240 for a free consultation.