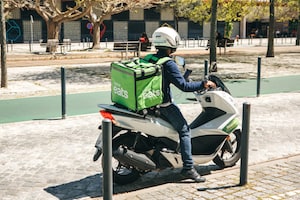 Technological advances such as the smartphone and phone apps have led to an explosion of many different services. Food delivery apps allow people in Los Angeles to order food from their favorite restaurants and have it delivered directly to their homes. Food apps offer delivery services from any restaurant, including eating establishments that do not offer their own delivery services. Food apps have greatly expanded the options that people have when they want to order food to eat in rather than to go out to eat.

While there are a number of different food apps available in the metropolitan area, they differ in their popularity and market share. As of Aug. 2017, the most popular food app in the City of Angels was Postmates with a 38.70% share of the market. The second most popular food app in LA was GrubHub at 19.70% market share. Other apps that have entered the Los Angeles market include Eat24 at 13.90%, DoorDash at 12.10%, UberEATS at 12.00%, Caviar at 2.60%, and Amazon Restaurants at 1.10%.[1]

If you are like many others, you may have installed one of these food apps on your smartphone. You may also have traveled on the roads near food app delivery drivers. One issue that has arisen with the proliferation of food apps is the liability when one of the delivery drivers cause accidents that injure others. If you have been injured in an accident with a food app delivery driver, it is important that you understand your legal rights. Getting help from an experienced attorney in LA might help you to recover compensation for your losses.

Delivery Drivers have a Higher Risk of Causing Accidents

The way in which food apps work makes it likelier that the drivers who drive for them might be involved in accidents. This is because drivers who deliver for these food app companies must follow strict delivery time schedules and get paid more if they make more deliveries which makes them more prone to cause accidents. For example, Postmates guarantees that deliveries will be made within one hour of an order being placed. Drivers are able to keep around $6 per delivery of the delivery fee. To make more money, they must deliver more orders very quickly.[2] This might lead the drivers to speed and to engage in other reckless driving behaviors that can place others at risk.

Another factor that can make drivers for food app companies likelier to be involved in accidents can be a low minimum age. For example, GrubHub allows people to drive to make food deliveries when they are as young as 19.[3] By comparison, Lyft and Uber drivers must be at least 21 years old. Younger drivers have a much higher collision risk than older, more experienced drivers. According to the Centers for Disease Control and Prevention, teenage drivers who are ages 16 to 19 are three times likelier to be involved in fatal accidents than drivers of any other age group.[4]

The combination of time pressures to make deliveries according to rigid schedules, the need to make more deliveries quickly to drive up pay, and the hiring of young people to drive might make food app company delivery drivers more dangerous on the roads. If one of these drivers causes a serious injury accident, the question of who will be liable to pay might be a real issue.

Liability when a Food App Driver Causes a Crash

When a food app delivery driver crashes into another vehicle or into a pedestrian, bicyclist, or motorcycle, the issue of liability will arise. California is an at-fault state for motor vehicle collisions and uses comparative fault to assess legal blame. Comparative fault in California means that the court looks at the fault held by each party who is involved in a collision. If a motorist is found to be partly to blame in his or her injury crash, his or her verdict will be reduced by the percentage of fault that is allocated to him or her.[5]

For example, if you are injured in a crash that was caused by a food app delivery driver, but the jury decides that you were 10% to blame for the crash, your award will be reduced by 10%. Because of the way in which comparative fault works, it is common for defendants who are clearly liable to try to assign some of the blame to the victims.

A big liability issue that may arise in a wreck involving a food app driver is whether the food app company might hold some liability. Food app companies claim that their drivers are independent contractors in an effort to avoid liability. If the drivers are considered to be acting within the scope and course of their employment at the time that they cause collisions, their employers may be liable under a legal theory called respondeat superior.

Respondeat superior means that the master must answer for the actions of its servant. In the legal realm, this means that employers are liable when their employees cause injuries to others while they are working on the job. The issue is that independent contractors are considered to be self-employed and are not employed by the companies with which they contract.

An assertion by a food app delivery driver that it is not liable for an accident may not stand up in court, however. Similar arguments have been made in the past by rideshare companies, but these defenses have not always been able to stand up in court. Food app companies, like rideshare companies, require their drivers to carry insurance on their vehicles that at least meet the minimum requirements for insurance in the state. The companies also have insurance available for injuries to third parties if the driver's insurance is insufficient to cover the losses of the victims.[6]

The problem with Postmates requiring only the minimum insurance for its drivers is that the minimums are very low. In California, the minimum liability requirements for third-party bodily injury liability is just $15,000 per person up to a total of $30,000 for two or more people in a collision. The second problem is that if the driver did not purchase a rider or supplement for using the vehicle to make commercial deliveries, the insurance company may refuse to provide coverage at all. The supplement insurance that Postmates has may cover up to $1 million in general liability coverage for couriers.[7]

UberEATS now uses a similar insurance structure as Uber, which depends on the stage of delivery. The way in which this works is as follows:

GrubHub only requires its drivers to carry basic insurance with the $15,000/$30,000 minimum California requirements. Personal insurance can deny coverage if the company learns that the driver failed to disclose to the company that he or she was using the vehicle for commercial purposes. GrubHub continues to argue that its drivers are independent contractors.[8] Unfortunately, this means that an attorney must argue to hold GrubHub liable along with whichever restaurant the driver was delivering the food for.

DoorDash only requires its drivers to carry minimal insurance. However, it does provide supplemental liability coverage for property damage or personal injuries that are caused by their drivers.[9]

Caviar, Delivery.com, and other apps are newer and are only beginning to come online in the LA metropolitan area. None of these appear to require their drivers to carry any insurance beyond the minimum liability requirements. Lawyers can make arguments about the course and scope of employment and respondeat superior as to the companies or restaurants for whom the drivers are delivering at the time of a collision, but the outcome of these arguments is not guaranteed.

Get Help from an Attorney at the Law Offices of Steven M. Sweat

Accidents caused by food delivery drivers who drive for food app companies can involve tricky arguments regarding liability and insurance coverage. Because of the complexities that might be involved in such a case, it is important for you to seek help from a Los Angeles food app delivery car accident attorney. Our experienced attorneys are best-suited to sort out these issues and to try to recover the maximum compensation for people who are injured or killed in crashes involving these drivers. Contact the Law Offices of Steven M. Sweat today to schedule a free consultation.