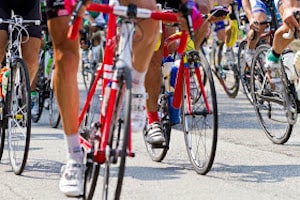 Cyclist-to-Motorist communication is a great way to prevent bike accidents. Of course, you are entitled to consult an attorney and receive compensation from careless drivers for injuries suffered in a bicycle-vehicle collision with that individual. However, it is obviously better to avoid getting into an accident in the first place, and there are several things that you can do to help increase your visibility and decrease the odds that you will find yourself in that situation.

One way to become conspicuous on roads that are usually dominated by cars and other vehicles is to use lights and reflectors. These are especially important – and oftentimes legally required – if it is nighttime or the weather conditions warrant their use. In fact, using these during sunny days will also help you become more visible to drivers than would have otherwise been the case.

Of course, limiting your nighttime riding to as few hours as possible helps as well.

Another way to become conspicuous is to wear brightly colored clothes. Anything fluorescent would likely do the trick and help increase the distance at which drivers perceive you by about four times as much as would have otherwise been the case.

Make sure that you signal your turns as doing so helps decrease the chances that you will surprise a driver when you move. Point your arm out in the direction that you want to head before making that turn.

Note that it is very important to keep driving straight ahead while you are signaling. This is because cars are sometimes much closer to you than they should be. If you have not mastered this skill yet, make sure to first practice it on quieter roads with no or few cars around.

Many pedestrians make eye contact with drivers prior to crossing the street to ensure that they have been seen and that they have the go-ahead to cross. Cyclists doing the same thing can help prevent collisions from occurring as well.

If you are unable to make eye contact with the driver, consider waving one or both arms to get his attention. This is because it is usually easier to see arms waving back and forth than it is to see a bicycle coming at her.

If you still cannot get the driver’s attention, sound a horn or bell that you have attached to your bike or simply yell something like “Watch out!” or “Hey!”

Ride Slightly to the Left

Many bikers ride so far to the right that they practically hug the curb. However, there are several reasons why you should consider moving towards the center of the lane.

Possibly the most important benefit to making this change is being able to avoid slamming into a car door that opens in front of you. Some who have been in this situation also run into issues when they do have enough time to swerve to the left of the car door but are then involved in an collision with a different vehicle that is in that area.

It is also true that somebody about to open a car door after parking would be more apt to see you if you are closer to the middle of the lane than biking right next to all of the cars that are parked behind his vehicle.

Another situation in which it makes sense to not be at the far right of the lane occurs when you are directly to the right of a vehicle waiting for a red light to turn green. Unfortunately, you are likely in the driver’s blind spot in that scenario; if she were to turn right, a crash may result. However, if you instead move to the left and behind that car, you can react to what that vehicle does as well as be much more visible to any cars that may pull up behind you.

Even if you bike to your office downtown every day, see if there is a quieter route than the one you have been taking. Also, if you have some flexibility as far as when you hit the roads, try to take on those thoroughfares that you cannot avoid during quieter times of the day. Cyclists simply enjoying this activity as a form of exercise are encouraged to head out into the country if possible.

The most obvious benefit of riding on quieter streets is that there are fewer vehicles on the road distracting the driver from seeing you.

Even in the best of circumstances, accidents do still occur. As a cyclist, you can do everything possible to be seen and heard and still get struck by a motor vehicle due to the driver’s inattention or other negligence. If you or a loved one is involved in one, make sure to contact a bicycle accident attorney so that an appropriate amount of compensation can be awarded. Steven M. Sweat, Personal Injury Lawyers, APC has been represented bike accident victims throughout Southern California including Los Angeles, Orange County, San Diego and the Inland Empire for almost two decades and offers a free consultation on the 24 hour 7 day a week toll free cyclist’s injury helpline: 866-966-5240!