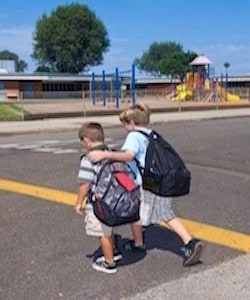 Child pedestrian accidents in Los Angeles are still a huge problem. Greater L.A. has a population of approximately 4,000,000 and about 30 percent of those people are under the age of 18. Los Angeles Unified School District (LAUSD) is the second largest public school system in the U.S. and has almost 700,000 active students. When kids are at play or going to and from school, they inevitably have to cross the street or many streets including some of our more congested thoroughfares in areas with a high amount of school age children like the L.A. basin and the San Fernando Valley. In fact, nationwide almost two thirds of pedestrian accidents occur on urban roads like our found in The Southland.

The general laws of negligence apply to drivers who are involved in pedestrian accidents with children if the child is injured or killed. This means that a motor vehicle operator may be liable for civil damages including past and future medical expenses and physical pain and emotional distress related to an auto accident if that driver was negligent (i.e. they failed to use reasonable care in the operation, maintenance or ownership of their motor vehicle). This can include driving carelessly, getting behind the wheel drunk or stoned, or even loaning their car to a person whom they should know was incompetent to drive. In the case of commercial vehicles like trucks and cargo vans, the business entity who employs the driver may be found liable if they operator was on the job and “within the course and scope” of his employment at the time of the incident.

Special Duty Owed by Adults to Children: The laws of the State of California require that adults “anticipate the ordinary behavior of children” and “be more careful in dealing with children than with adults.” California Civil Jury Instruction 412 – Duty of Care Owed Children

Standard for Conduct of Kids: CA law does not hold minors to the same standard of care as adults. In fact, the law states as follows: “A child is required to use the amount of care that a reasonably careful child of the same age, intelligence, knowledge, and experience would use in that same situation.” California Civil Jury Instruction 402 – Standard of Care for Minors

What Should you do if Your Child is Involved in a Pedestrian Accident in or Around Los Angeles
Contact Us
Practice Areas
Search this Website
Client Reviews
★★★★★
I have known Steven for some time now and when his services were required he jumped in and took control of my cases. I had two and they were handled with the utmost professionalism and courtesy. He went the extra mile regardless of the bumps in the road. I can not see me using any other attorney and I would recommend him to any of my family and friends. Josie A.
★★★★★
Steven was vital during our most trying time. He was referred by a friend after an accident that involved a family member. While he was critical and lying in the hospital, Steven was kind, patient and knowledgeable about what we were going through. Following our loss, Steven became a tough and aggressive negotiator and made sure that we receive a huge compensation. I would refer Steven in fact, this happened 2 years ago and I still speak highly of his service. Cheryl S.
★★★★★
Mr. Sweat is a pitbull in the courtroom as well as settlement negotiations - You can't have a better equipped attorney in your corner! It is a pleasure working as colleagues together on numerous cases. He can get the job done. Jonathan K.
★★★★★
Because of Steven Sweat, my medical support was taken care of. Plus, I had more money to spare for my other bills. Steven is not only an excellent personal injury lawyer, providing the best legal advice, but also a professional lawyer who goes beyond his call of duty just to help his clients! He stood up for me and helped me get through the process. I would definitely recommend. I couldn't think of any better lawyer than him. MiraJane C.
★★★★★
I must tell anyone, if you need a great attorney, Steve sweat is the guy! I had an awful car accident and had no idea where to turn. He had so much to deal with because my accident was a 4 car pile up. Not to mention all the other cars were behind me and they were not wanting to settle in any way! He never stopped working for me and had my best interest at heart! Audra W.
★★★★★
I believe I made the best choice with Steven M Sweat, Personal Injury. I was very reluctant to go forward with my personal injury claim. I had a valid claim and I needed a professional attorney to handle it. I felt so much better when I let Steven take my case. His team did everything right and I am very satisfied. Stia P.
★★★★★
I have to say that Steve has been exemplary! I met Steve at a point with my case that I was ready to give up. He took the time and dealt with all of my concerns. Most importantly, he was present and listened to what I was going through. He was able to turn things around, put me and my case on the right track! The results were better that expected! Highly recommend!! Cody A.
View More
Submit a Law Firm Client Review