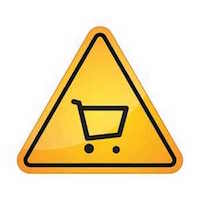 California retail store accident claims can be difficult to prove. What is California law on the duty to inspect property and prevent injury? When a mishap on commercial property such as a slip and fall, trip and fall, collapse of shelving or falling merchandise, or collision with a forklift or other equipment occurs, is the retailer responsible for resulting bodily harm caused by this calamity?

Let’s face it, whether you live in San Diego, Los Angeles, Riverside or San Bernardino County, we all, at one time or another, shop at one of the large national retail chain stores like Home Depot, Lowes Hardware, Best Buy, Target, Wal-Mart, or even a grocery chain like Ralphs, Vons or Food-4-Less. These retailers, for the most part, have reasonable inspection and maintenance policies that keep the store in a fairly safe condition. However, to err is human and there are times when policies are flawed or not followed by employees and even managers and mishaps occur. These can involve a slippery substance being left on the floor for too long, improper use of cleaning products, stacking inventory too high or in a way that becomes unstable, leaving carts or boxes in the aisle or walkway, thereby creating a tripping hazard, or not providing proper assistance to customers in retrieving items from shelves. When any of these scenarios play out, it can result in customers or patrons falling down and breaking bones or injuring their neck or back, lacerating their skin on protruding, sharp objects, being struck in the head and suffering concussions or other trauma and any number of other ordeals.

Based upon the laws cited above, a person shopping in Southern California including Los Angeles would be entitled to be compensated by the store owner or their insurance company if the management or employees of a big box store like Home Depot either: (a) had a property danger that existed for long enough to fix it before someone got hurt; (b) Failed to inspect to know that such a danger existed; or (c) created the condition by such things as placement of items in aisles, stacking boxes too high, or using improper techniques in the maintenance of their trade or business. The problem is that when someone gets hurt at a store, there is an immediate attempt to do a “cover up”. Often, reports are taken and claimed to be “internal” or “proprietary”, video tape footage gets erased within a short time loop, witnesses are attempted to be kept “confidential” and many other tactics are used to avoid discovery of the truth. It takes an aggressive and qualified injury lawyer to get to the heart of the matter through the legal discovery process. This is often the only way that liability can be proven and justice can be served.