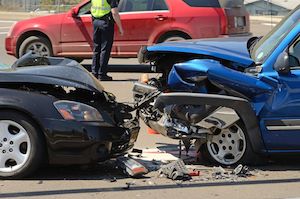 As a California head on collision attorney, I know that this particular accident scenario can cause more serious injury or death than just about any other type of motor vehicle accident. In fact, according to national and worldwide statistics, head-on collisions comprise only about two percent of all motor vehicle accidents but a full ten percent of fatal crashes. This is largely a matter of physics. If two vehicles are traveling toward each other at even a moderate speed, this speed of impact is doubled. For example, if a car and a truck are both going 50 miles per hour and collide front to front, the impact speed would be equivalent of 100 m.p.h.

According to the American Association of State Highway and Transportation Officials, the following common characteristics come into play in causing front end crashes between two motor vehicles:

Given these findings, it is important to know which California statutes come into play in determining legal fault in these incidents. These provisions of law include the following:

California Vehicle Code 21751: States that on any two-lane highway, no vehicle should be driven to the left of the center dividing line, “unless the left side is clearly visible and free of oncoming traffic for a sufficient distance ahead to permit [passing or overtaking a slow moving vehicle] without interfering with the safe operation of any vehicle approaching in the opposite direction.”

California Vehicle Code 21752: Prohibits outright traveling on the left of center under the following conditions:

California Vehicle Code 23152: Prohibition against driving under the influence of alcohol or drugs.

California Vehicle Code 22350: Requires all drivers in the Golden State to only travel at a speed appropriate and safe given the roadway conditions including road characteristics such as curves.

Unfortunately, motor vehicle accidents where two vehicles collide at any rate of speed head on can cause serious bodily injury or death of the driver or passengers. The above cited vehicle codes are but a few of the laws that may come into play in determining legal fault and whether either negligence or even gross recklessness may be the culprit. In these types of tragic incidents, it is important to promptly investigate the accident scene and any findings of law enforcement officials. California Highway Patrol reports, photographs, and physical evidence must be analyzed quickly in order to obtain full compensation in any personal injury or wrongful death claim arising from this type of wreck. The Law Offices of Steven M. Sweat, Personal Injury Lawyers, APC has represented victims of head on collisions all over the state of California and offers free initial consultations on these matters. We never charge a fee unless and until money is recovered for the victim or the victim’s family.