Due to the volume of traffic and the number of motor coaches in California, bus accidents happen frequently. Vehicle safety is very important and bus drivers and companies owe duties of care to the people who are riding on the buses as well as to the motorists around the motor coaches on the state’s highways. Nearly everyone in Los Angeles and throughout the state has had an experience with a loved one’s being killed or injured in a motor vehicle accident. When people shift their focus to public transportation or school buses in California, the safety of passengers and children becomes the primary focus. In Los Angeles, San Francisco and San Diego, many people use public transportation systems including buses, microbuses, trolleys and vans that are used by BART, METRO and other public transportation entities. These systems are also involved in numerous collisions every year. 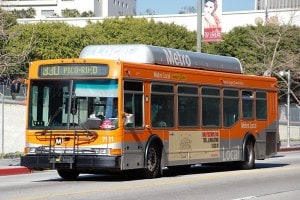 According to a study that was released by the Department of Health, school bus accident statistics reveal some alarming facts. Here are some figures that were included in the study:

There are multiple grassroots organizations that are advocating towards policy changes in order to increase fines and sentences for drivers who violate traffic laws around school buses. There should also be a general review of the safety design of buses. Currently, seat belts are not required for bus passengers in California, resulting in many injuries.

Bus accidents in California fall under the purview of the state’s tort laws. When a person is injured in an accident involving a bus in the state, the person will need to rely on the legal theory of negligence in order to prevail on his or her claim. In general, when a person or entity acts in a careless manner, causing another person to suffer harm, the careless person or entity may be liable to pay damages to the injured victim. In order to prove their cases, plaintiffs must show the following elements existed:

In California, bus drivers have higher duties of care owed to their passengers than do other drivers. California Civil Code Sect. 2100 places the highest duty on bus drivers and common carriers. This duty level means that even the slightest degree of negligence may be enough to show that a driver or entity violated the duty of care owed by common carriers in the state to passengers. When a bus is involved in an accident with other motorists, however, the duty of care that is owed is one of reasonable care instead of utmost care.

Another legal principle that comes into play in Los Angeles bus accidents is that of vicarious liability. Under this principle of law, companies and public entities that employ negligent bus drivers are responsible for the payment of damages for the actions of their employees while they are on the job.

There is a difference between cases involving public entities and private companies, however. While plaintiffs have up to two years to file claims against private companies and their drivers after bus accidents happen, the statute of limitations for actions against public entities is only six months. This means that injured victims and the families of people who are killed by public buses and other public transportation systems must act quickly to file their legal claims after the accidents happen. Under the California Torts Claim Act, plaintiffs must file claims that follow specific guidelines that are outlined in the state’s Government Code.

There are a variety of different types of bus accidents. Some involve commercial tour buses, others involve public bus systems in the various municipalities in California, and others involve buses operated by national companies such as Greyhound. Some accidents happen because of driver negligence while others occur because of negligent failures to repair and maintain the buses. An experienced personal injury attorney in Los Angeles reviews the facts of individual cases in order to determine the appropriate defendants to name and the legal theories upon which the claims might be based. He or she will also analyze the liability that is involved in the bus crash claims.

In addition to the legal analysis that is normally involved in motor vehicle accident cases, additional legal liability analysis is required in claims involving bus accidents. An attorney may investigate whether the bus was properly repaired and maintained under state and federal regulations. A lawyer may also investigate the bus driver’s history in order to determine whether or not the driver had a history of careless or reckless driving. If the driver’s history is poor, then there may be a valid basis for a claim of negligent retention against the company or public entity employing the driver.

Need for Independent Counsel When Multiple Plaintiffs are Asserting Claims

In bus accident cases involving multiple plaintiffs, it is common for the plaintiffs to need independent counsel. This is because some of the interests of the passengers may conflict with each other. An attorney has an ethical duty to not accept representation of clients whose interests may conflict. In order to avoid potential conflicts of interest, an attorney may advise people to each seek their own lawyers in bus accident cases.

When a passenger, motorist or pedestrian is injured in a bus accident that resulted from driver or entity negligence, several different types of damages may be available. Plaintiffs may be able to recover compensation to pay for their past and future medical expenses. They may also recover money to pay for their lost wages, and if the accident renders them permanently disabled, they might also recover damages to pay for their future lost earnings. In addition to economic damages, people may recover noneconomic damages as well. These might include compensation for the physical pain and suffering the plaintiffs were caused by the accident and the emotional distress that also resulted. People may also recover damages for any reductions in their quality of life that resulted from the accidents. Damages for disfigurement may also be available for people who are left facing permanent scarring, burn injuries and others.

A lot is at stake for passengers and others who are seriously injured in bus accidents. There are tight deadlines, and determining the proper value of a claim is highly complex. It is important for people to immediately seek help from a personal injury attorney as soon as possible after an accident. A lawyer may be able to use experts such as investigators, accident reconstructionists, medical professionals and others to help build a strong case for his or her client. He or she may help his or her client to meet all statutory deadlines and to identify all of the parties who should be named as defendants in the lawsuit. An attorney may also be able to uncover multiple sources of recovery so that he or she might maximize the amount of damages that his or her client might recover.

Handling the Aftermath of a Bus Accident

If you or your loved one has been injured in a public bus, a charter bus accident in California, the first step you should take is to get a thorough medical evaluation. You should make certain to follow all of your doctor’s recommendations for follow-up care. It is important that you refrain from signing any documents sent to you by insurance companies, and you should refrain from speaking to insurance adjusters without first speaking to a personal injury attorney. You may have injuries from the accident that you don’t immediately recognize and that could begin showing symptoms days later. Make certain to protect your rights and contact an experienced Los Angeles bus accident attorney for help with preserving and pursuing your recovery rights.