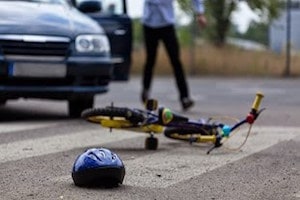 Bicycle hit and run claims in Los Angeles are up a dramatic 42 percent over the past 10 years according to statistics from the Los Angeles Times (see article here). As a bike accident victim’s attorney and advocate, it is something I am seeing more and more of these days. It is a frightening scenario: You are riding along a busy thoroughfare like Santa Monica Boulevard, you feel a bang, you end up laying on the roadway or sidewalk and the driver of the vehicle speeds off before you even know “what hit you” and you are left with trying to seek medical attention and treatment for severe injuries like fractures. It is scary to think it could happen to anyone but, it is playing out over and over again in L.A. County. These are the types of horror stories chronicled in the piece.

Statistics on Drivers Striking Cyclists and Leaving the Scene in L.A. County How can Cyclists in Southern California Protect Themselves From hit and run Drivers?

As we all know, wearing brightly colored clothing, using lights and reflectors and obeying the rules of the road for California cyclists is the best way to try to avoid being hit by a car but, given the traffic congestion in L.A. and the lack of enough bike lanes and other infrastructure, incidents are unfortunately inevitable. From a legal standpoint, the best way to protect yourself from being saddled with medical debts without any basis for recovery, cyclists can do the following:

When you are struck by an unknown driver and maimed or the cyclist is killed, it is difficult if not impossible to get justice. Police place a very low priority on these types of crimes and don’t always place a lot of resources to solving the crime. This is where a private attorney can be of great benefit to the accident victim or the family of the deceased. Private legal counsel can use private investigators and other resources to attempt to identify the driver. They are also essential even if you are only presenting a claim to your own insurance carrier. Although all claims should be promptly reported to the insurance carrier, the injured victim or their family should retain the services of a lawyer prior to making any formal statements or taking other measures. Presenting the claim in the proper format is essential in hit and run cases in order to prevent a denial of the claim. In addition, if the matter cannot be resolved via a satisfactory pre-litigation settlement demand, a formal arbitration process may be necessary. This would involve presentation of evidence to an arbitrator and request for an award which could then be enforced against the insurance company.