The Steven M. Sweat, Personal Injury Lawyers, APC, APC, is proud to announce the winner of our college scholarship essay contest for 2016. Here is the winning essay from Hannah Sweatt, of Cropwell, Alabama. Hannah plans to attend the University of Alabama and study secondary education.

Violation of Safety Took My Best Friend Away 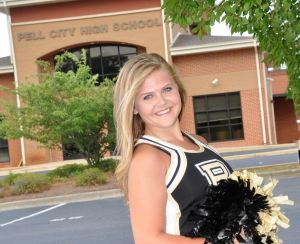 In today’s economy, many truck drivers are pressured to take on many more hours than physically possible. My father, Shawn Sweatt, was driving an eighteen-wheeler to Kentucky to drop a load. However, he never returned home. He swerved to avoid a slow-moving vehicle and did not make the lane change, because the liquid in his tanker shifted and flipped the truck. He died on impact. I remember saying good night to him the night before and thinking he needed a break or vacation. My father’s job kept him away from us. We were the people he wanted to be with the most. I remember him constantly worrying about his log book and how he was going to make it look like he had hours left to run a load. The fact that he had to worry that his bosses would take away his privilege from running a load simply because he might turn one down because he had not slept in the past two days, is unacceptable. My dad believed his sole purpose in life was to provide for us. He would never turn down a load and his bosses knew that, so they would pressure him into agreeing to take it.

Truck drivers are extremely underappreciated and the job comes with many safety requirements. According to the Hours of Service (HOS) rules, a driver must take at least eight consecutive hours in the sleeper berth, plus a separate two consecutive hours either in the sleeper berth, off duty, or any combination of the two. Drivers almost never follow this rule because their supervisors pressure them, and often threaten them into taking as many loads as possible. This causes drivers to “work”, or alter their log book for it to look like they have enough hours to run the load.

I strongly believe that economic pressure in the motor carrier industry affects commercial drivers’ safety in a negative way. These drivers only want to provide for their family and their supervisors take advantage of that and pressure them into breaking the HOS rules and running the load. This can be dangerous and lead to injuries, including death. This is something we cannot ignore. These drivers’ safety is important and if I could go back and tell my dad it was not worth it, I would. I think I speak for many drivers and their families when I say that the economic pressure takes a toll on the driver when the hours they drive are their only source of income.

Thankfully, the Coercion Rule was passed on January 29, 2016. The Coercion Rule allows drivers to report any type of coercion. It also allows Federal Motor Carrier Safety Administration to issue penalties against motor carriers, shippers, receivers, or transportation intermediaries. I think this will have an impact on the commercial side of trucking, but I also believe that it will have a greater impact on safety. I wish this rule would have passed when my father was alive. I can only hope that the Coercion Rule will protect drivers and lower the rate of deaths due to trucking incidents. I believe that safety is important and pressuring drivers into taking on more hours than physically possible is shameful. This is something that should be stopped and can be stopped with the help of the Coercion Rule.